It isn't every day that we find ourselves in the presence of greatness.  It's a funny thing, really.  One day your neighbor's child is walking alongside your son or daughter toward the high school graduation podium. The next, she's headed halfway around the world to represent your country as an international soccer player.

That's how it was just three years ago for Highland Ranch, CO, classmates of US forward, Mallory Pugh, when their friend stepped off the high school field and onto a global soccer stage.  Mallory is the youngest woman to join the US Women's team in the past 11 years.  Together with her teammates she is breaking records and inspiring young female athletes across America to work hard and dream big.

These exceptional women not only serve as an important symbol of America's national pride, but have engendered an outsized surge of passion from their hometown communities the likes of which have been previously reserved for professional sports legends.

Smartly capitalizing on this passion, the US Women's National Team launched a WNT Everywhere Campaign in May 2019 which included commissioning murals of the athletes in locations that were meaningful to the players, such as their hometowns, club team locations, or college towns.  In total, 11 murals were produced by local female artists in San Francisco, Atlanta, Orlando, St. Louis, New York, Chicago, Los Angeles, Denver, Portland, and Cincinnati.  The unveiling of these murals built on the excitement of the upcoming tournament, creating multi-media events in these athletes' communities.

Once the Women's World Cup Tournament got underway in France, the athletes' hometowns turned out in force to support their players, hosting viewing parties of all shapes and sizes in stadiums, town centers and even retirement homes.  Local broadcasters were right in the middle of the action, capturing the personal stories and community energy.

Emotions were high as relatives of Boston native, Sam Mewis, started in the final game on July 7th as covered by WCVB-TV in Boston.

Across the country, local broadcasters traveled to watch parties and offered spirited reports of their own homegrown heroes:

Teenagers in Rose Lavelle's hometown of Cincinnati went BACK to their Mt. Notre Dame High School in June to catch their star player as the World Cup tournament got underway.

There was plenty of local pride on display in reporting on the games as was evident in this KRON-TV segment praising the two California-schooled forwards - Alex Morgan (Cal Berkeley) and Christen Press (Stanford).

Goalkeeper Adrianna Franch was the first woman from Kansas to ever make a U.S. Women's World Cup team.  Growing up in a small, rural town she poignantly described the importance that her community played in her life and success in this USWNT feature about her last May.  "Some people say it's all about hard work and effort and your determination... but you also need people.  And the people that you surround yourself (with) really guide your path and the direction you go."

And the people of Kansas and Missouri came out in droves to support the U.S. Women's Soccer Team.  The final match on July 7th drew 10,000+ fans to Kansas City's Power and Light District, as the city showcased its readiness to be the "Soccer Capital of America."   Local broadcasters were in the mix, on the air, and driving social media engagement.

Here's how the Hometown DMA games fared in comparison to the June time period averages among Household viewers.  DMA's listed are either hometowns or college towns associated with the players: 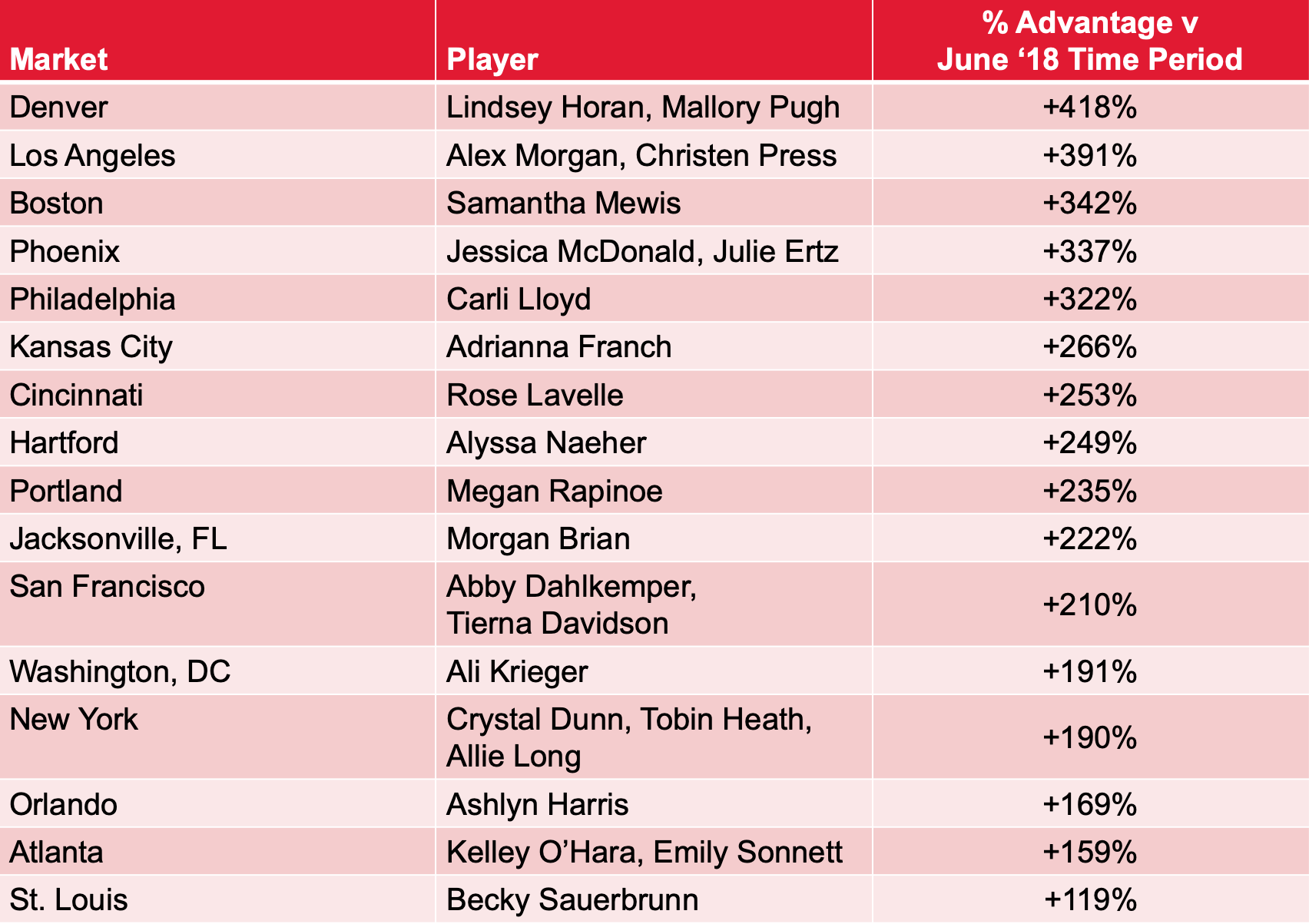 Katz Media Group conducted a study among its Our Media panel of local media fans to gauge the level of passion for soccer and the women's tournament.

Among those that watched the championship match

Even when considering all panelists, even those that didn't watch any of the games,

All this turns into a windfall of goodwill for brands that stepped up and sponsored the Women's World Cup.  Interest has certainly been on the rise across the U.S.A. as the team has successfully taken global prizes over the past few years, with FIFA estimated a billion viewers across the tournament.   Ad Age reported in early June that hundreds of branded videos with Women's World Cup-related content had been published online throughout the spring, for a combined total of 72 million views across all social media platforms, according to video measurement company Tubular.  And that was before any game play had begun!

Multiply that kind of engagement by the passion level of hometown fans, and you have one heck of a marketing bonanza.  Katz Media Group is proud to represent the many TV and radio stations across the United States that covered the U.S. Women's World Cup tournament.    This is the kind of content that is made for broadcast - live, simultaneous joy!

There are many great resources that continue to cover the U.S. Women's team and their hometown connections.  In addition to your local broadcast stations, check the WNTA website to see each of the official local city murals painted by local female artists.  There is a particularly good Hometown Heroes video series available from Fox Sports on the following three players:   Abby Dahlkemper, Crystal Dunn, Kelley O'Hara .

In addition,  the YouTube channel The American Outlaws did a complete series for the current team here:

Read More Locavore Posts
Locavore
Audio Renaissance
In Tune
On Measurement
Over The Top
© 2019 Katz Media Group. All rights reserved. This site is for business use only. Katz does not sell your personal information.