Get Smart... About Smart TV's 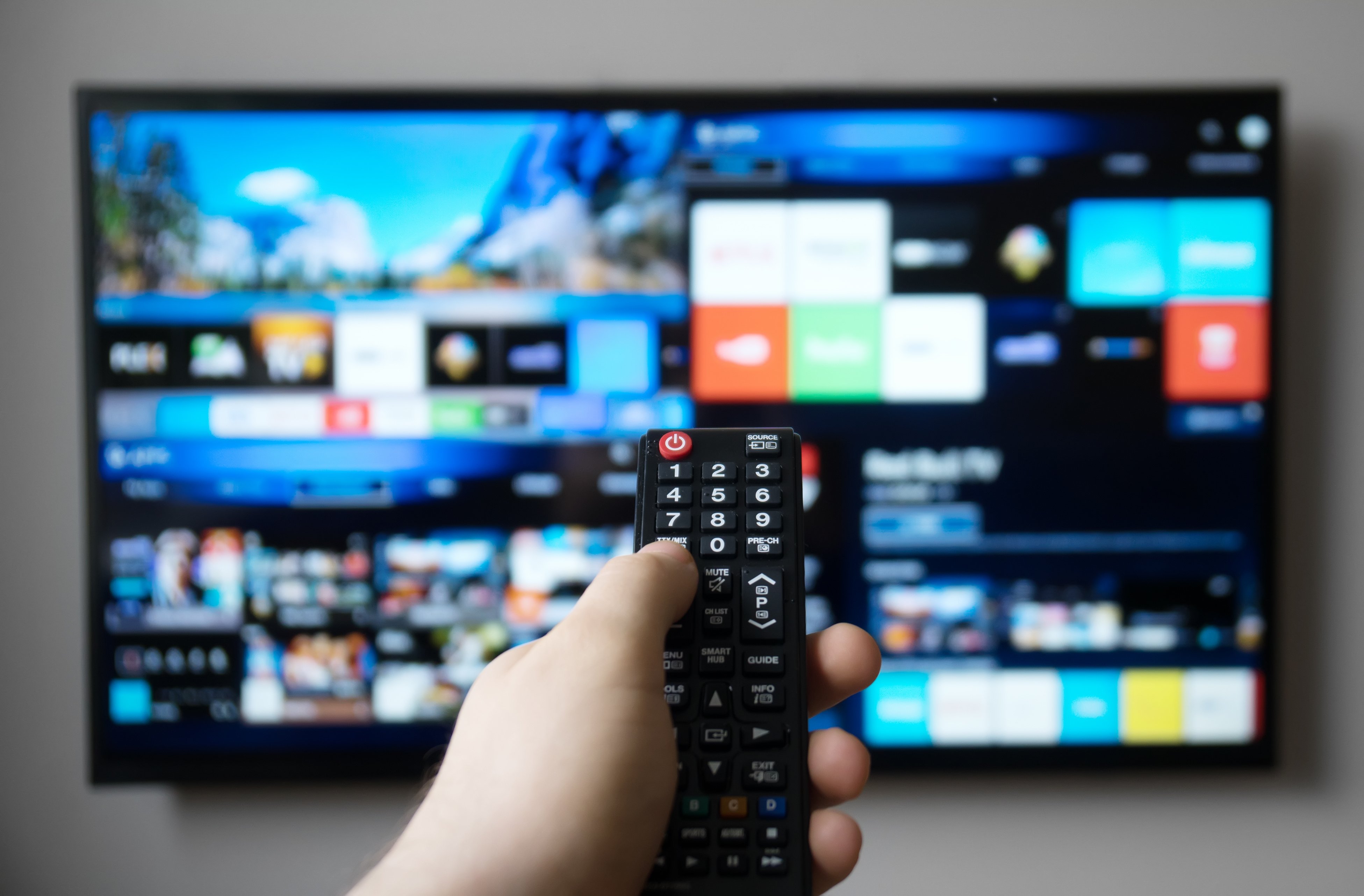 Walk into an electronics, appliance or big box store and you’re bombarded by a dizzying array of television sets with an alphabet soup of must-have features: HD. Ultra HD. LED. LCD. LED LCD. OLED. QLED. HDR. 4K. 8K. 3D. Curved. The Frame. HDMI. 120 Hz. Not to mention screen sizes that range from toddler (32”) to NBA center (86”), with a wide range of  ‘growth spurts’ in between: 43”, 50”, 55”, 60”, 65” & 75”. No matter which configuration may suit your needs, increasingly there is one indispensable feature that drives the decision to purchase a new set: the TV must be Smart.

Recent data released by the Leichtman Group notes that Smart TV penetration in the United States now stands at 32%. Just two years ago, in 2017, that figure was 24%; and a scant five years ago, in 2014, only 7% of households owned a Smart TV. In large part, that growth has been bolstered by falling prices for feature-laden sets. Contributing factors include advances in the manufacturing process; needing to move current sets off the shelf as newer, advanced TVs hit the market; and increased competition from Chinese manufacturers, including Hisense and TCL. As just one example, market research firm IHS Markit expects the price of a 65-inch 4K LCD TV to fall below $1,000 for the first time in 2019.

So, yeah, better make that new set a Smart one.

WHAT MAKES A TV SMART?

Simply put, a Smart TV is a traditional television set which has internet connectivity (either hardwired or via wi-fi) that allows you to not only browse the web on your TV screen, but also access apps for streaming video and music, playing interactive games, checking social media and even controlling connected devices throughout your home, such as lights and thermostats.

Initially, television sets were made “smart” by buying external Over-the-Top (OTT) set-top boxes or streaming devices from providers such as Roku, Sling, Amazon, Google and Apple and attaching them to your set. More commonly today, TVs are inherently Smart, as connectivity to these services is manufactured directly into the set itself. Of course, if you want to watch Netflix, Hulu, Amazon Prime and the like, you still need to have a subscription. (Or have cousin Mabel’s password handy.) But with access right there on your screen, you’re spared the bother of purchasing and installing bulky boxes with their unsightly tangles of wires and additional power cords. Not to mention not having to play “Guess Which Remote?” each time you watch a different service.

ARE SMART TVs ONLY FOR SMART PEOPLE?

Of course, anyone can buy a Smart TV. But according to data from market research firm GfK MRI, there appears to be a correlation between education level and the likelihood of owning a Smart TV. Adults who own a Smart TV are far more likely to have an Associate degree or higher (50.8%) than to have a high school diploma (24.2%) or less (7.3%). 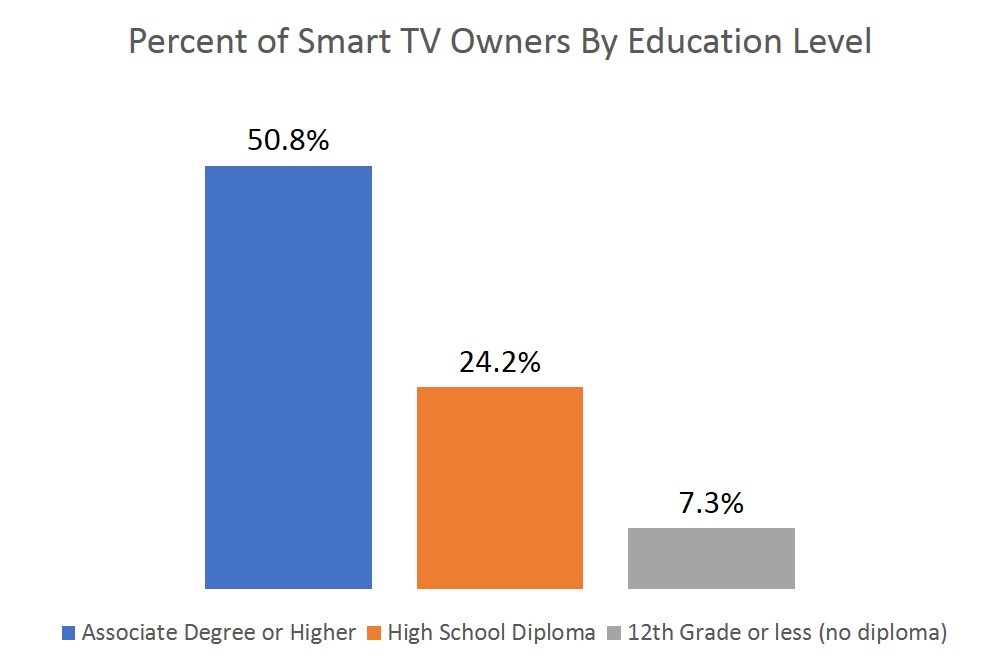 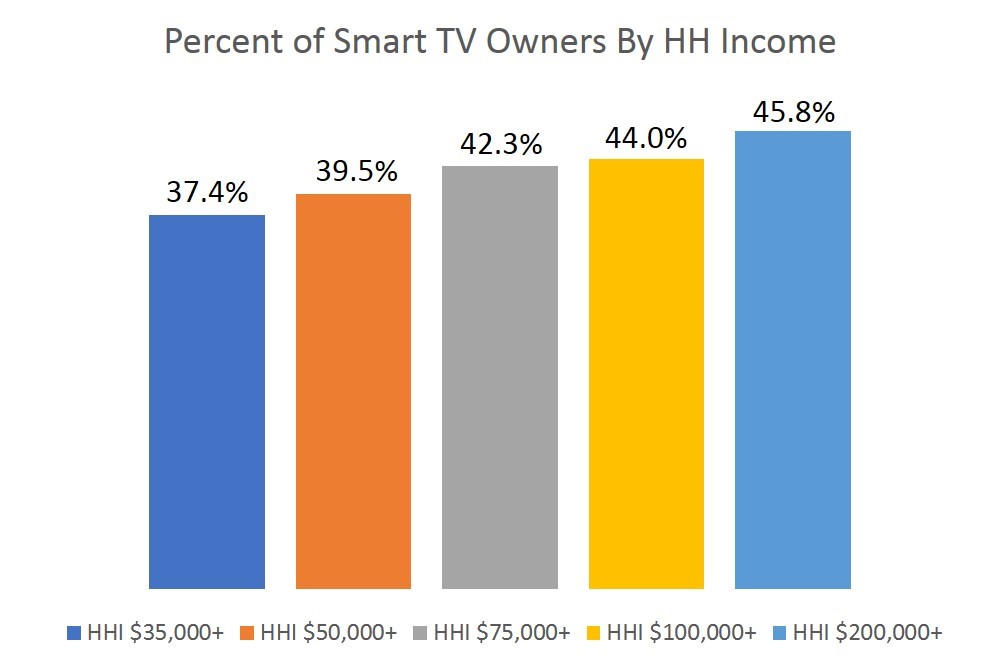 And since income can correlate to type of residence, it’s notable that 73.1% of Smart TV owners own their home while 26.2% are renters (2018 Fall GfK MRI). 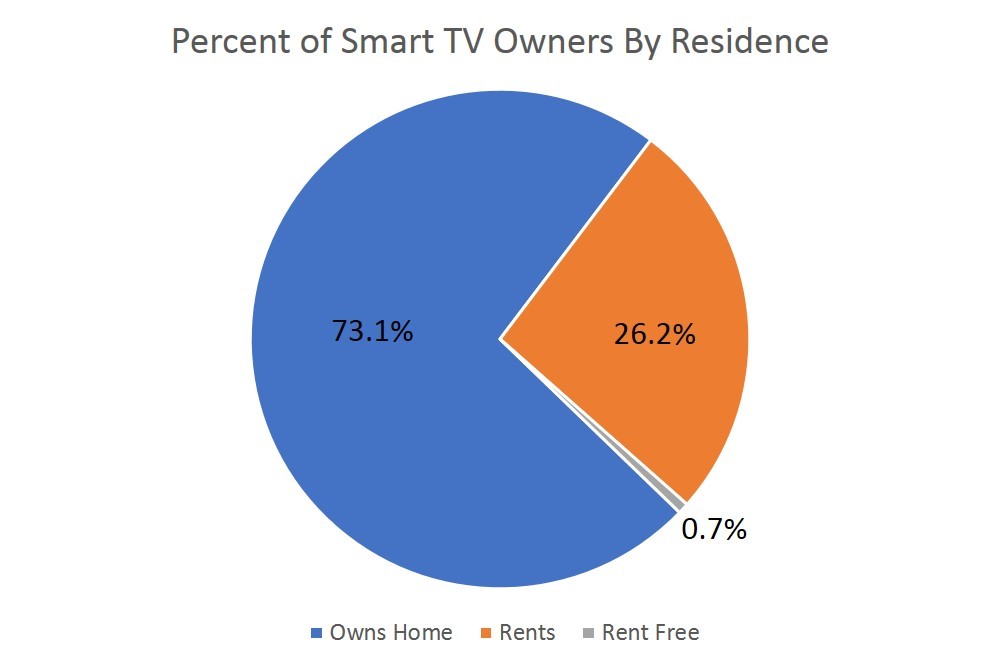 ISN’T ALL THIS NEW-FANGLED TECHNOLOGY JUST FOR THE YOUNG?

Define young. And for that matter, old. The same GfK MRI survey shows that, except at the extremes, Smart TV ownership is relatively equal across all age groups: 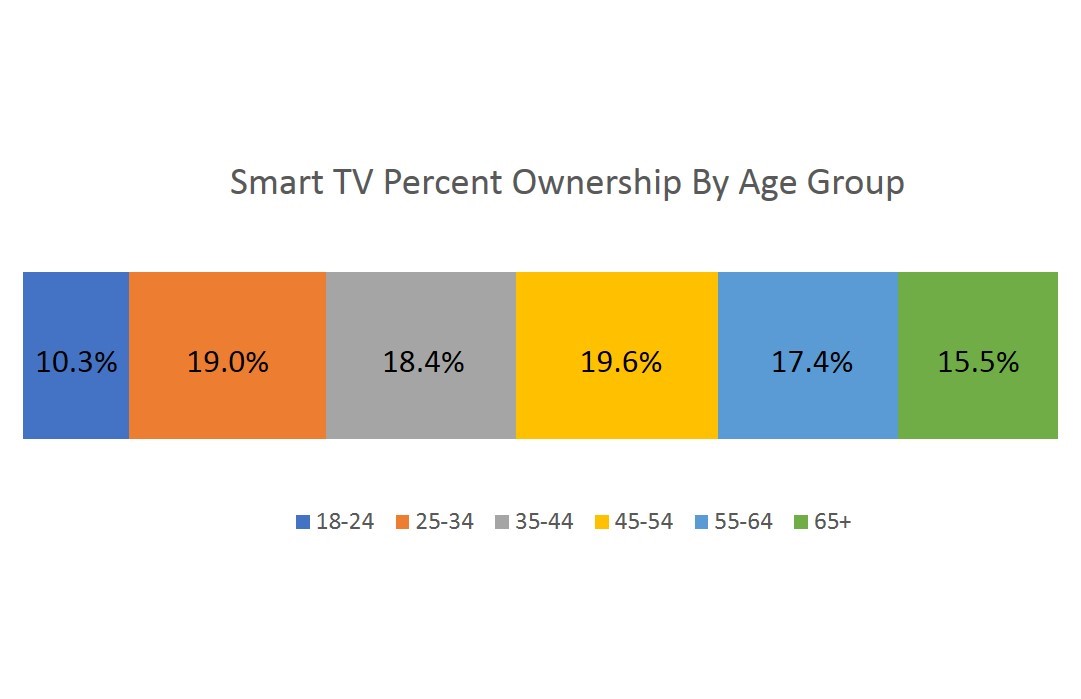 IS A SMART TV A SMART INVESTMENT?

When it comes to TV viewership, two terms have entered the vernacular: “Cord-Cutters” and “Cord-Nevers.”

As defined by the Television Bureau of Advertising (TVB), the local broadcast television trade association, Cord-Cutters are people who at one time subscribed to but now have cancelled a pay TV service (cable or satellite.). Cord-Nevers have never subscribed to a pay service. Recent data released by TVB shows as of May 2019, 14.7% of U.S. households are “broadcast only.” This means they are not hooked up to cable or satellite TV services and are limited to watching local broadcast stations (via an over-the-air antenna) or streaming services. This number has risen steadily since they began reporting the data; since May’16, when “broadcast only” penetration stood at 11.9%, the number of such homes has risen by 24%.

As cord-cutters and cord-nevers become more prevalent, Smart TVs will grow in importance as a conduit for content delivery. These homes will likely rely on streaming services or an over-the-air antenna for the bulk of their video content. A Smart TV is a smart choice to deliver it, enabling them to watch TV shows, movies and viral videos on the big screen in front of the comfy couch, and not have to squint at a small handheld screen. And remember, the streaming services are built into the TV for easy access. (Just remember to keep your subscription current, or make sure cousin Mabel does.)

I’M GETTING TO KNOW SMART TVs.  IS IT TRUE THEY CAN GET TO KNOW ME?

In a sense.  While you won’t be on a first-name basis, Smart TVs are equipped with a technology called Automatic Content Recognition (ACR), which tracks your viewing minute-by-minute and attempts to identify all the programs you watch.  With your viewing history at hand, the TV manufacturer and/or third-party marketers they partner with can recommend other programs you may like. The knowledge these parties glean off your viewing habits can also lead to advertisements and special offers targeted specifically to you.

To that end, as the television industry moves toward adopting the new ATSC 3.0 “Next Gen TV” broadcasting standard, your local stations will also get to know you and will be able to tailor ads, offers and services from local merchants directly to you. This new technology, combined with a Smart TV, will also enable interactive features that allow you to find out more information on a product being advertised, or see an extended version of an ad (known as “ad telescoping”). Other ATSC 3.0 advances, benefitting viewers and local broadcasters alike, will include heightened picture and sound quality; increased multicasting abilities on digital subchannels, for more viewing choices and additional revenue streams; ease of viewing broadcast video on mobile devices; and enhanced, geo-targeted emergency alerts. These new standards are currently being tested in a handful of markets, with many of the largest station groups planning a wide rollout in the top-40 markets by the end of 2020.

ALL THIS SOUNDS COOL. THERE’S ACTUALLY SOMETHING IN IT FOR ME.

It is. And there is. So much so that there is a plethora of analytics and data companies that see value in leveraging the information collected from Smart TVs to turn television viewing into a more personalized experience. Samba TV, Inscape, iSpot.TV, Alphonso, 4C Insights, 605 and DataPlusMath are among the firms that provide cutting-edge data and insights to networks, stations and ad agencies. Traditional measurement companies like comscore and Nielsen are also working on leveraging Smart TV data. For instance, comscore has partnered with Inscape for deeper analysis on ad effectiveness and ROI. And Nielsen, through its acquisition of Gracenote and Sorenson Media, aims to be the industry leader in making addressable advertising a reality.

As with most modern technology, there can be privacy concerns. Legally, Smart TV makers can only collect and use your data with your permission. Manufacturers, advertisers and marketers say that any data collected is done so anonymously. As Smart TVs become more prevalent and more companies leverage the data, it is imperative that they take the steps necessary to ensure that consumer privacy is protected. Data is a precious commodity whose biggest value lies with people willing to provide it. If you still have concerns, you can always choose to opt out.

But when you think about it, Smart TV data collection is no more invasive than what we’re exposed to already. Probably less so. Data from credit cards, loyalty cards and cell phone location data have been adding to our consumer profiles for years. With Smart TVs, we can at least get a tangible return via program recommendations, more relevant ads and perhaps fewer commercials. Additionally, sharing your data helps mitigate the cost of production and lets you buy a bigger set for the same price.

When I’m watching my favorite shows on my reasonably priced, very large Smart TV and see an ad for Cicis pizza, I get frustrated because there are no Cicis in my state. But I take solace knowing that in the very near future, instead of a generic ad from a regional chain, I’ll be seeing an ad from Angoletto Pizzeria & Restaurant created just for me – maybe with a special offer for my favorite sausage and broccoli rabe pie.

NOW THAT’S WHAT I CALL SMART! 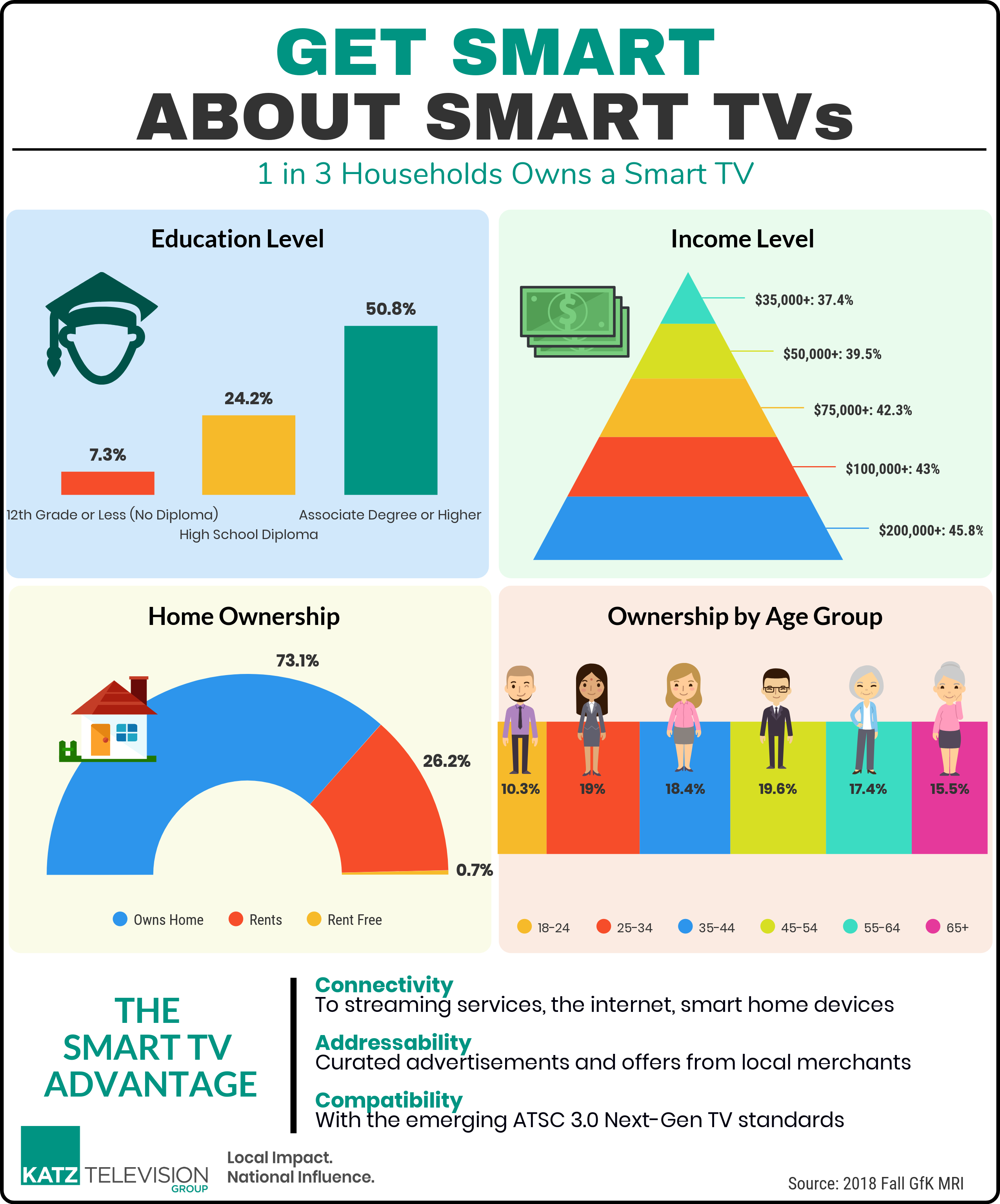